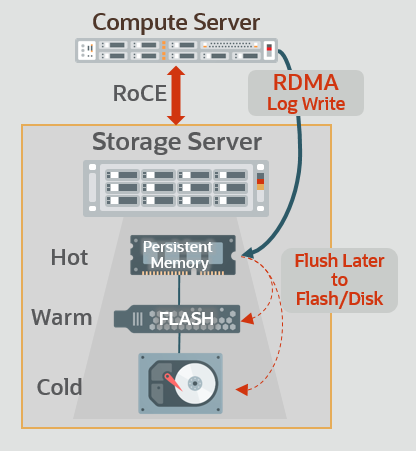 The Exadata Storage Server provides high performance I/O services for the Oracle RDBMS, and Oracle is using PMEM to improve its logging latency by 8x.

It should be noted that this is NOT a caching mechanism.  The persistent memory log is never used to satisfy reads; all data is flushed as soon as possible in FIFO order.

To solve the problem of achieving ultra-low latency with minimal network overhead, we decided to use RDMA.  Specifically, we used RoCE (RDMA over Converged Ethernet) along with IB Verbs, which provide a rich functionality set for remote memory operations.  Additionally, the primary IB Verbs feature which we used was Shared Receive Queues; in a nutshell, this is a mechanism which allows you to create a pool of buffers that are shareable across a set of client connections.  The Exadata Storage Server partitions the persistent memory log into a set of buffers, and then places those buffers into SRQs.  Once clients connect to the Exadata Storage Server, they can issue an RDMA operation which will then use any available free buffers assigned to those SRQs.  When a message is sent via RDMA, the server is notified as far as which buffers contain the data. When the server is done processing the request, it places buffers back on the SRQs.  In addition, logging data sent via RDMA is prioritized on the network end-to-end to prevent any congestion.

However, the nature of an RDMA-based protocol presents its own problems:

Persistence is guaranteed by ensuring that the RDMA transfers reach the ADR (Asynchronous DRAM Refresh) domain.

The inherent nature of persistent memory is the saving grace here. Regardless of a software crash or a node crash on the Storage Server, we can guarantee that after a software/node restart/reboot, any previously sent logging data will still be there on persistent memory. The Storage Server can then flush any unwritten data to its permanent location.  There are issues as far as ensuring message/data validity and ordering of writes – those are solvable, but outside the scope of this blog post.

The primary issue here is message/data validity. Depending on the timing of a client’s death, logging data sent via RDMA will either arrive intact with appropriate notification to the server, or it won’t.  In the case of the former, it is not interesting at all, as the request will be processed normally.  It is the latter case which is interesting because data could be partially copied to persistent memory.  Even though the server may not be notified, a server crash at the same time could be problematic: a subsequent server restart must be able to differentiate between a complete/valid message and an incomplete/invalid one.  Again, the mechanism for making this determination is outside the scope of this blog post.

The end result of this new scheme is that we have seen up to an 8x performance improvement in database logging latency.

In summary, the Exadata Storage Server uses persistent memory in combination with RDMA (via IB verbs) to provide an extremely low latency database logging service for clients connected via a high-speed network.

I am a Consulting Member of Technical Staff in the Exadata Development group at Oracle.  I have been at Oracle for 25 years, and have worked on various products over the years including the RDBMS (Oracle’s flagship product), as well as Exadata, our most successful engineered system.  I would categorize myself as a systems programmer.  In the last several years, I have worked on two major Exadata features: Flash Logging and PMEM Logging – both of them are designed to provide high performance, low latency logging services for the Oracle RDBMS.

This work by Steven Swanson. is licensed under a Creative Commons Attribution-NonCommercial-NoDerivs 4.0 International